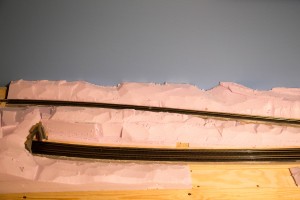 Over the past couple of weeks, I have not done that much work on the railroad as I hoped for. Spring is coming, and with that allergies. So productivity is kind of low to be honest. And I also made a decision to not continue with laying tracks for the freight parts in the harbor, but instead focus on landscapes in the area between the two stations. It’s kind of boring with mayor holes in the landscape between the tracks. And I and my son can still run our trains between the hidden yard and the two stations, so adding more tracks would “only” add more to the same thing we already have.

So I started with the landscape the same way as I always do. Pink foam! You love and hate that material. You can use it for almost all areas of your landscape. It’s easy to fix with white clue and very easy to reshape if you weren’t happy with the way it turned out. But it’s also hard to cut easy. I use both a knife and a specialized tool from Proxxon to cut it. Depending on the tool, there will be a lot of small pieces that you cut of and with the static electricity it will be everywhere! My workbench is so messy right now so I can’t really work there. I just need to be done with the part of the landscape and then do a major cleaning activity to get it back to the way I like it.

I was planning to use the Faller car system on the part of the layout that is between the stations. But as I miss calculated the turning radius, there is no place for the cars to turn and make it back on one of the ends. So I had to scrap that plan and just do a normal road in the landscape. It’s a bit easier to do, but changes the plan for the smaller city. Annoying!

I’ve completed the biggest parts of the landscape by now. There is still one area that I need to cover with pink foam before I continue with the next part of the landscaping. I hope I can do that during this week.

There are two additional thing I have done during the last couple of weeks. First of all, I have replaced all my feedback modules from LDT to my own design. So I’m now trying to sell the LDT feedback modules on Tradera as they are fully operational. If you need feedback modules and don’t want to create your own, I still have five of them that I will sell. The second thing I’ve done is to test a decoupler from Uhlenbrock. I’m not 100% satisfied, but with a bit of trimming I might get them to work the way I like them to