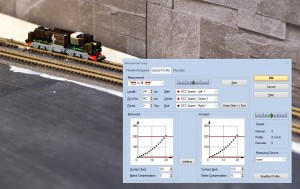 The past week have not been focused on laying tracks, designing PCB’s, connection wires an all other fun things you do when building a model railroad. Instead, I have unpacked one hug box of trains and wagons that have been in storage since I moved to my new house. And boy was I into a fun exercise with cleaning wheels, engines and so on. But that was not the worst thing. I had seven engines that didn’t run! How horrible. So I opened them all up to try to find the problems. Two of them where fairly easy to fix as there were no DCC decoder installed. As I have a couple of decoders on store at all time, I just put in two DH 05C and they worked perfectly. But the other five trains where a bit harder to fix. In the end, after cleaning, soldering some lose wires and so on, I got 4 of them working. One had a bad motor, and needs replacement.

If any of you readers are using a computer program to control you trains, you all know that setting up the correct speed profile is extremely important to get good breaking and distance calculations. On one of my engines, one of those that just needed cleaning, I noticed that I had been so lazy and just measured the top speed, and had an uncalculated linear speed profile on all other speeds. So I went over all the engines and measure the correct speed profile where I had been lazy, and also on the engines that I installed the new decoders. If you have calculated these speeds before, you know that it takes time to run in all the engines. My calculation track is 241 cm long, and running it at speed 1 is not fun!

But the end result is wonderful! I now have 27 engines with decoders installed, and they all have a correct speed profile in TrainController.